To offer food to females in exchange for sex works well for most males in various species, except when one eats too much of it. At the Chiang Mai Zoo in Northern Thailand, the male panda, is apparently too fat to have sex and his partner, the female Lin Hui, has lost interest. Zoo keepers have done everything to spice up their sex life including showing them movies of other pandas having sex!... (photo from Chiang Mai Zoo).

The other day I went to my favorite bar (and yes, of course it’s Irish) to drink a couple of beers, play some pool and have a bit of fun. The regulars, my mates, are an eclectic mix of professions, trades, ages, economic status, ethnic backgrounds and sexual orientations, all with very different interests in life. Mostly, we just have fun, drink beers and martinis, play pool, discuss football and holidays, complain about how everything got to be so expensive and the incompetence of politicians, and we laugh at a good as well as a bad joke. Sometimes, someone throws in a kind of provocation, a more complex question.

“Cheers, mate!” someone shouts to me from across a table. “You’re a biologist, so you may be able to answer my question for the day: what’s life all about?” 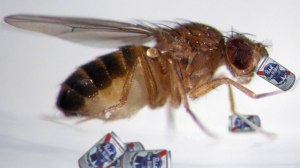 “Cheers to you too, mate. You can’t ask a thing like that. That’s not a bar question,” I say. “But, no problem there. Life is all about food and sex,” I add, taking a slug of my wonderfully cold beer and confirming my view that the first beer always tastes the best.

“I’m giving you a serious answer. Everything living organisms do is to get either food or sex. Food is a great thing. Firstly, it is necessary to survive and you need to survive in order to have sex, because, if you’re dead, you can’t have sex. Secondly, females in particular love food because they need food to survive, so they can have sex, so they can have progeny; and their progeny needs food, lots of food.”

“Maybe for other animals,” he argues. “But for us humans, there’s more to life than food and sex. What about science, for one?”

“Very simple—science is a means to an end. Why do you think there are many more male scientists than female? Because they need to invent easy ways to get food to give to females, because the females then get all crazy about them and they have sex. Then, they get more progeny who need more food, which implies more science, more sex…”

“You’re far out, mate, we’re more than that. We have a soul, we produce great art!”

“Most good art is produced by unhappy males. How often do  you hear of a great, happy artist? Do you know why they are unhappy? Because they don’t get the sex they want. That’s why they produce art. Females like beauty because the more beautiful sons or daughters they have, depending on the species, the more grandchildren they will have. Also, artists are normally safe, they are sensitive and it is unlikely they will kill their progeny. So, males produce all the art they can to impress the females so they have sex with them. Then, they get more progeny, and the progeny needs more food, which…”

“OK, I got it,” he says, “artists are sensitive, but what about power?  I guess you’ll say it’s another way of getting sex.”

“You’re right. You’re a quick learner. Powerful males can in theory provide better for their progeny so females like powerful males. For the males, this is good news because if they don’t have a clue about art, they can always try to become rich or powerful, which are basically the same thing. Power means more sex because progeny that are well provided for survive longer, have more sex and have their own progeny, which means grandchildren. This means they need more food, more science…”

“What if I’m not good at art or at the power game?”

“Then, mate, you are in deep s… in terms of sex, but don’t worry, it happens to most males in most species. You can always bluff. Most males do.”

“Well, that’s maybe why I’m here drinking with my mates…”

“Could be. Fruit fly males deprived of sex drink four times more than their mates that have sex.”

“You’re kidding me!” he exclaims.

“No, I’m not, that’s scientific proven. It’s all a question of maintaining the levels of a neuropeptide in the brain and if you can’t have sex, booze seems to do it—for fruit files, that is. Fruit flies don’t play pool though, so no worries about that,” I say.

“Doesn’t sound fair to me,” he replies, “but who programmed this bloody thing anyway? Don’t tell me it was…”

“Nobody. Genes have only one goal, which is to reproduce, no matter what genes we’re talking about. It’s all about surviving and reproducing, eating and copulating. It’s like an algorithm, a very simple one indeed.”

“Not that I’m complaining, mate, not too much anyway, but it does bother me. It seems like the females control everything.”

“They do. In most species they choose the males. Virtually all females will mate and reproduce. For the males, it’s a lot more difficult. Competition is fierce and females are picky. Many males never get a chance. That’s why they have to trick the females with all their cunning, but food is the best and most direct way. Males try desperately to improve their chances, in some species by means of attractive exteriors, in others by appearing powerful. Basically, it’s all a bluff to impress the females.”

“Too right, mate. Males bluff, but females get better and better at calling their bluff because their main concern is to produce good progeny.”

“OK, I understand that and I can see what the females get, but one things beats me: what about the males, what do they get?”

Have a beautiful day!

Ethology Institute Cambridge offers programs and single courses in animal behavior and training. Some courses are free.
Join 2,564 other followers